Her work may look delicate, with its detailed line, but Caroline Armington was a bit of a rebel.

Daughter of a farm implement businessman in Brampton, Caroline would head into Toronto on weekends to study with her father’s cousin, J. W. L. Forster (portrait artist to the Prime Ministers). She did this against her parents’ wishes. They refused to support her financially, and would have no part in her ideas of traipsing off to Europe to study.

Teaching in Halifax, training as a nurse at Guelph General Hospital, and working as a nurse elsewhere, Caroline built up her personal savings. When Frank went to Paris with his family in 1899, she accompanied them as far as New York, to stay and work as a nurse. There, she was able to visit the City’s museums and art galleries, which surpassed anything in Toronto at the time.

One image that caught her eye was Rosa Bonheur’s “The Horse Fair” (1852-55). Rosa sketched twice a week on Paris’ Boulevard de l’Hôpital for a year and a half to create the work, disguised as a man to avoid attention. 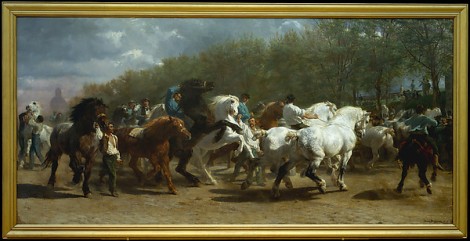 Eventually meeting up with the Armington family in France, she married Frank. They returned to Canada and the couple began hopping across the country, with stops in Winnipeg and Sault Ste Marie. While Frank was well accomplished, becoming a founding member and the first vice-president of the Manitoba Society of Artists, Caroline taught private art lessons, but really was of little note.

That all would change when the couple returned to Paris, studying there from 1905 to 1910. Male and female students were separated into different classes, but the same male artists taught both genders. While the European artists studying in Paris during the era were exploring the recent trends, the “American school” was more interested in studying the pre-existing styles of European art. (1)

While Frank was the first of the couple to exhibit, A. Y. Jackson (who was a house guest) noted in a letter to his mother that Caroline was accepted into a show of the Independent Salon, whereas Frank wasn’t: his third rejection. (The couple was also friends with poet Robert Service. While staying with the Armingtons, and envying their “perfect partnership”, (2) he met his wife Germaine. Frank would later paint a portrait of Germaine Service, viewable on the website of Loch Gallery.)

Over the years, the couple’s popularity and exhibition experience grew, and Caroline developed a style more detailed and controlled than her husband’s. Etching required her to draw in reverse; to quote Bob Thaves, “Ginger Rogers did everything Fred Astaire did, except backwards and in high heels.” Caroline was unusual in her technique, etching directly to the plate without sketching the scene with pencil on paper first.

She insisted on signing her given name on artworks, instead of C. H. Armington, as an agent had suggested, despite the era’s reduced commercial potential for the works of female artists.

It worked. The Armingtons, but Caroline in particular, were known for their strong business sense. Among her commissions was a 1924 order for an etching of the White House from the United States government, to present to First Lady Grace Coolidge, getting the T. Eaton Company to carry some of her art in their Toronto and possibly Winnipeg store art galleries, and landing a solo exhibit at the Corcoran Gallery, Washington, a facility generally limited displaying work of American artists, certainly not Canadians in France.

In the period, any works being brought into Canada for potential sale were taxed on arrival, regardless of whether or not they were actually sold in the exhibition. (3) This 1907 tariff was removed in 1924 for unsold prints, but by then the couple was better intrenched in other markets than Canada. (4) Saturday Night columnist Margaret Wetherell noted that “[n]o such impost was demanded in the United States, where they had landed, and where the art-lovers have the longest purses. Consequently, New York, Chicago, Minneapolis, and Rochester, saw the Armington’s picture first, and kept them.” (5)

While the couple’s star faded after their death, pointing them towards obscurity, in life, they were both individually well regarded. While it’s hard to discuss just Caroline’s life without talking of Frank, she can and should be considered on her own merits. Arguably, since the publication of “Caroline and Frank Armington: Canadian painter-etchers in Paris” (1990) by the Art Gallery of Peel (now PAMA), Caroline is the more commercially desirable of the two artists. 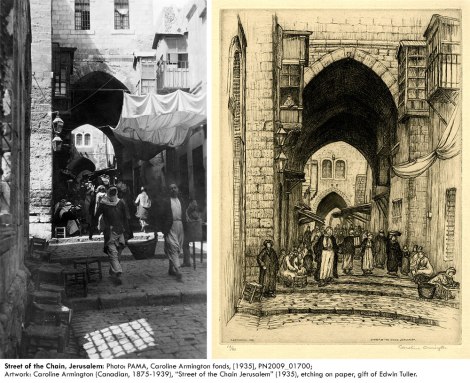 Caroline (and Frank) at the Region of Peel Archives

Much of the surviving original material that survives in the collection are items sent to Caroline’s friend Carrie Smith, Mrs. Caroline Smith Crawford. Her contributions to the art gallery are featured below.

Why the dearth of information? When Caroline died in 1939, Frank remarried. He died soon after, in 1941. His second wife and step-daughter moved in 1943, and destroyed the majority of the couple’s papers and photographs. This leaves us with lots of professional records or copies of these records—visitors’ books, sales records, and address books—to form a picture of her career. Even of what survives, copies of her diary end in 1909, with one entry in 1931. Much of what’s known personally about Caroline and Frank is through interviews in the 1980s.

An early 1920s self-publication by Caroline, often wrongfully attributed to around 1929, sold at bookstores in Paris including W. H. Smith and Sons and Brentano’s.

The records form an artificial collection at our archives. A finding aid is available in the reading room, and it may be re-described eventually to reconcile the various sources of material.

Janet Braid’s significant research correspondence with collectors, universities, and dozens of art galleries is also available, in our artificial collection, as is ephemera from the marketing of the book, in the Region of Peel fonds.

In our Art Gallery permanent collection

Caroline Armington (1875-1939), “The Mosque on the Mount of Olives” (1937), etching on paper. Gift of Caroline Smith Crawford and the Peel Historical Society. Peel Art Gallery, Museum and Archives collection.

The gallery purchased exactly 300 works from the late Rose Tuller of New Jersey, with the financial backing of local Caroline Smith Crawford. Of those, 234 of the etchings were Caroline’s, the rest by her husband, Frank.

Over the years, this number of Caroline Armington works has grown to 433 from a variety of sources, including but not limited to Al and Simmie Rain, the Brampton Public Library, Mrs. Alice Wilkinson, and through purchases funded by the Art Gallery of Peel Association (since superseded by Friends of PAMA).

While there is a minimal level of duplication in our gallery collection, it’s by far the most definitive collection of Caroline Armington’s works; she assigned catalogue numbers to 550 etchings.

Records of Caroline, and her art itself, at other institutions 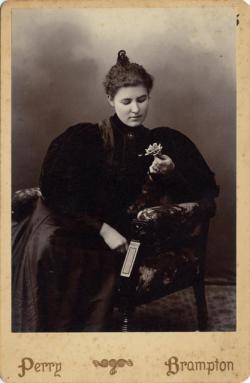 Three other institutions are known to have a significant selection of archival material referencing the artists or their exhibitions.

At Library and Archives Canada (LAC), the archives’ Canadian War Memorials Exhibition collection includes works by five artists, of whom, Caroline is the only woman. She contributed “No 8 Canadian General Hospital, St. Cloud” and “The British Army and Navy Leave Club, Paris”. The library at LAC includes 30 items about Caroline, largely exhibition catalogues, spanning from a 1919 show at Britain’s Royal Academy of Arts of the aforementioned war memorial exhibition, through to a 2006 catalogue of a show at the Halifax Club of both Caroline and Frank’s work by Lunenberg company North Shore Canadian Art.

Similarly, the National Gallery of Canada Library and Archives holds a range of catalogues and other publications about the artist, from 1919 to 1999. (All three institutions have significant overlaps in coverage.)

Extensive textual records of Janet Braide (1924-1987) are held at the Queen’s University Archives. An art historian, Braide was author of the book “Caroline and Frank Armington: Canadian painter-etchers in Paris”, published by the Art Gallery of Peel in 1990. To our knowledge, any of her papers relating to the Armington book are in Peel; the fonds at Queen’s is largely focused on her exhibition of William Brymner for the Agnes Etherington Gallery, with some material on Anne Savage and Prudence Heward.

Look into the tiny folios in Queen Mary’s doll house, which is part of the Royal Collection Trust at Windsor Castle, and you’ll even find a postage stamp-sized print of Caroline’s there (as well as a watercolour by Frank). The house contains thousands of items created by the top artists, designers, and craftsmen of the day.

The following references are all sourced from Caroline and Frank Armington: Canadian painter-etchers in Paris. It is believed that copies of some of them are in the Armington collection at the Archives, but it was easier to just cite the book, okay? I’ve got other things to do.

Edited 17 April 2019 to clarify the relevance of the quote on Ginger Rogers, in relation to etching.