The year 1967 was the beginning of many things in Canada: Caribana, the Canada Games, the Order of Canada, Pizza Pizza, McDonald’s Canada, WWF-Canada,  Mr. Dressup, and many other things. Amidst the Canadian Centennial celebrations, there was a wave of investment in infrastructure, the rise of heritage preservation, and the start of many community organizations, all of which made an impact on Peel. This post takes a look at some of those milestones from fifty years ago.

The beginning of libraries, transit, and schools

Lots of public projects were greenlit or opened in 1967. Venues opening included the Malton Centennial Library, Lakeview Centennial Library, and Clarkson-Lorne Park Centennial Library through the Toronto Township Public Library Board, the Streetsville Public Library through that Town’s library board, and the Township of Albion and Town of Bolton collectively opened a new structure. Erindale College (University of Toronto Mississauga) and Sheridan College (then based in the old Brampton High School) both opened, thanks to earlier efforts by Education Minister Bill Davis, coincidentally the MPP for Peel. (Just outside Peel, Humber College opened.)

Port Credit GO Station has been in operation since 1967, as GO Transit launched its Lakeshore West and Lakeshore East lines.

A new Peel County Courthouse opened, the Bramalea Guardian described the structure as Chinguacousy Reeve Cyril Clark’s “pride and joy”. The building ultimately proved impractical, and was demolished in 2000. Centennial Recreation Centre in Brampton, now the Legion, and its surround park both are namesakes. 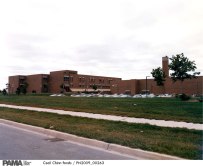 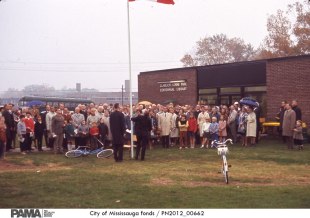 Toronto Township Public Library Board minutes are available at the PAMA Archives for 1967 only, continued by the Town of Mississauga Public Library Board minutes, 1968 – 1974, and City of Mississauga Library Board minutes until 1978. The Town of Streetsville fonds includes a variety of records on the Streetsville Library, including the Centennial project. The archives holds the records of the Central Peel District High School Board, 1962-1968. Records of the courthouse are largely held by the Archives of Ontario, but we have the architect’s conceptual illustration in the collection, among other items. Similarly, Sheridan College is a provincial entity, but Peel’s holdings include the blueprints of the first school. Reeve Clark himself was Warden of Peel in 1967; the Cyril Roland Clark fonds covers 1931-1979.

The end of heritage buildings

Canada’s Centennial created a groundswell of appreciation for the country’s heritage. Looking at the year in retrospect, Lincoln Alexander said that “people paused to reflect on their history … where they came from … where they’re going.” (1) Indeed, the Province acknowledged the movement by creating an agency called the Ontario Heritage Trust, to promote heritage conservation.

The movement arrived perhaps a little too late. In an effort to promote themselves as moving forward into the future, Toronto-Dominion Bank and Bank of Montreal opened new buildings in downtown Brampton, in place of their previous structures. (These modern structures ironically have both survived 50 years of change, now home to TD Canada Trust and Scotiabank, respectively.)

With increased use of both the Canadian National Railway line and Queen Street East, an underpass was built at the edge of the downtown. Among the buildings leveled was 1 Maple Street, the oldest house in Brampton.

Resident Cecil Henry, whose fonds of photographs is in PAMA’s collection, documents the extensive changes in the town, focusing in on the 1960s and 1970s. A skilled hobbyist, he returned to the same locations over and over, creating a fantastic record of hundreds of locations.

As shown in our 2015 exhibit Unbuilt Peel: What Could Have Been, the changes could have been even more dramatic. In what I’ve often referred to internally as the “doomsday book”, one consulting firm recommended the City level nearly every building in the downtown except the banks and churches, and replace it with a variety of massive, modern structures. This view here is of Main Street North, looking northwest. (Simultaneously, Brampton residents were asking council to ask the province for a new bypassing road, to lessen traffic through the downtown.) 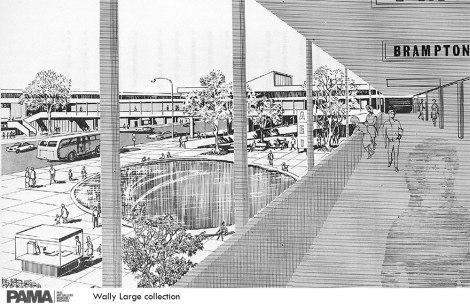 If not for the patriotism of 1967, would this plan have been implemented? We’ll never know.

If you’d like to explore this plan more, “A development plan for Downtown Brampton” is part of the Wally Large collection.

The beginning of community groups and projects

Our Martha Branigan fonds documents the Brampton Canadettes Girls Hockey Association from the 1960s to 2000s, including their annual Easter tournament, which draws international entries. Also starting in the Centennial year were Big Brothers Big Sister of Peel (as Big Brothers Peel), the Bramalea Satellites football team, and Erindale Woodlands Residents Association, among others.

PAMA itself owes part of its existence to the Centennial.

Peel had various exhibits of artifacts over the decades, at the Brampton High School thanks to historian Wm. Perkins Bull in the 1930s, at an old school house in the early 1960s, at both the International Ploughing Match in Caledon and in Belfountain in 1963.

But it wasn’t until the Centennial that the Peel County Historical Society and local Women’s Institutes found a permanent home, the old County Registry Office. Yes, opening day wasn’t until 1968, but the hip-hip-hooray spirit of “Ca-na-da” can be connected.

The Archives is home to most surviving records of Wm. Perkins Bull, the Historical Society, and Peel branches of the Federated Women’s Institutes of Ontario.

The end of a municipality (sort of), Toronto Township

The Township of Toronto was quickly loosing its rural identity. At the start of 1968, it reincorporated as the Town of Mississauga. Advance a few years to 1974, and the Town would become a City, after adding the Towns of Streetsville and Port Credit.

As Peel’s official repository for government records, a selection of documents from each municipality are in our collection.