Note: A version of this article appeared in the Fall 2016 issue of the Archives Association of Ontario’s (AAO) themed issue of Off the Record focusing on “Archives and Indigenous Issues.” In honour of June being National Indigenous Peoples Month, we have decided to publish an edited version of the article on our blog.

“You have a great history. No student has yet succeeded in getting back to its beginning. The annals of the Eastern Hemisphere bristle with the names of great Indian Warriors and Chieftains.” Wm. Perkins Bull, 1939 [1]

The Region of Peel Archives at PAMA (the Peel Art Gallery, Museum, and Archives) has, within our Wm. Perkins Bull fonds, an underutilized resource for those interested in Indigenous Studies and/or the history of Indigenous communities in Peel.

From 1931 to the early 1940s Wm. Perkins Bull (1870-1948), a Peel raised lawyer turned historian, sought to document various aspects of Peel County’s history. Bull and his research staff interviewed long-time residents, corresponded with academics and government officials, scoured archives, and collected records, artwork, and artifacts from then current and past residents. Bull utilized all of this material in the writing of numerous history books, each with a particular theme, including sports, religion, medicine, and the military. In total he produced 14 books, with various other manuscripts left unpublished upon his death.

Bull’s books, draft and annotated manuscripts, research material, correspondence, and personal papers eventually found their way to the Region of Peel Archives (arriving in various accessions between 1978 and 2012), where they now comprise the Wm. Perkins Bull fonds. Within the most recent accrual to the fonds (which has yet to be fully processed) we have found approximately 150 files pertaining in some way to the unpublished manuscript From Hemisphere to Hamlet. In this manuscript Bull was going to explore the history of the Indigenous peoples of Peel and North America, with a particular focus on Sitting Bull (ca. 1831 – 1890), a Sioux chief and holy man who was active in the Dakota Territory of the United States of America. In addition to drafts of this manuscript, Wm. Perkins Bull’s files include extensive research notes, newspaper clippings, maps, and other related material with a focus on Indigenous peoples. 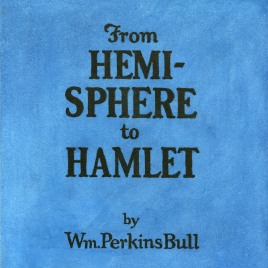 Peel’s archivists are hoping to raise the profile of these records because much of the material  could conceivably be of interest to historians, scholars, archaeologists, anthropologists, and affected citizens especially Indigenous peoples themselves. To that end, I will highlight some records that seem particularly noteworthy but which have yet to be widely consulted. That said, researchers are of course invited to visit our Reading Room to look through all of Bull’s research, correspondence, and writings.

Before describing a selection of the material I should stress that archivists are meant to be neutral (insofar as this is possible[2]), so I will leave it to users of the records to analyze and discuss in what ways Wm. Perkins Bull’s upbringing and worldview molded or influenced his research and narration. In terms of context, Bull’s family immigrated to Canada from Ireland in the 1800s, with Bull being born in Downsview (York County, Ontario) and raised in southern Chinguacousy Township (now the City of Brampton in Peel Region). He attended the University of Toronto and Osgoode Hall, and he had extensive personal and professional interests, including history, Indigenous peoples, law, business, and agriculture. He travelled widely, was a staunch Conservative and a practicing Methodist, and he was well-connected within the Canadian and British establishments (Bull counted among his friends businessman Timothy Eaton, writer Rudyard Kipling, explorer Richard Byrd, Prime Ministers Robert Borden and William Lyon Mackenzie King, and King George V).

A description of some of the records follows.

The draft manuscript of From Hemisphere to Hamlet:  Hundreds of pages of this manuscript survive and they cover a wide range of topics, including the “European concept of the Indian,” “Tribal evolution,” “Credit River Indians,” “myths & legends,” “daily life,” and “Sitting Bull.” While possibly a source of information on such topics (from an admittedly European/settler perspective), the manuscript could additionally be argued to constitute a 1930s historiographical artifact. Examined as such, it might reveal different assumptions, sources, and/or narrative techniques than those previously documented by historians of Indigenous Studies.

Index to “From Hemisphere to Hamlet” and page one of the draft manuscript, ca. 1938, Wm. Perkins Bull fonds

Correspondence and interview files: Compiled in the 1930s by Bull and his staff while completing their research, these files contain numerous anecdotes concerning interactions between early Peel settlers and Indigenous peoples.  Unfortunately, the accounts are very one-sided, because all of the submissions appear to be from settler families as opposed to Indigenous peoples themselves. Biases aside, material in such files may provide previously unknown information about the presence, movements, and activities of Indigenous peoples in the Peel area prior to the mid-1930s. 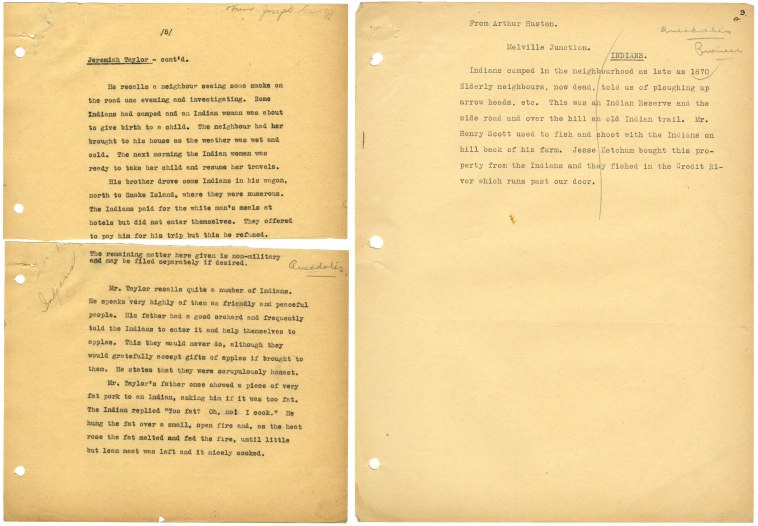 Photographs and illustrations: During his travels and research Bull created, commissioned, and/or collected a variety of visual material pertaining to Indigenous peoples. Of particular note are a number of photographs taken or collected by Bull during an early 1900s visit to a reserve in the Canadian west, possibly Saskatchewan.[3] Such trips were common for Bull, given his stated life-long interest in the Indigenous peoples of North America.[4]

The photographs raise a number of questions, including exactly where and when were they taken? By whom and for what purpose? Are these authentic snapshots of life on a Canadian reserve in that time period?

Also found in the fonds are a number of illustrations, including some ink drawings of Indigenous artifacts that may have been found on land near the hamlet of Inglewood in the Town of Caledon:

As an aside, one of the research files contains a listing of Indigenous artifacts found in the Peel area then located in the collection of the Royal Ontario Museum:

Patient registers from The Perkins Bull Convalescent Hospital for Canadian Officers (based in London, United Kingdom): Bull and his family were living in London when the First World War erupted. At that time there were many wounded and recovering Canadian Officers in London and hotels were often full. Bull and his wife, Maria, therefore decided to open their London home as a place of temporary accommodation.  Soon it became a place where battle weary Canadian Officers could recover from illness and injury. In a 1939 speech discussing his interest in the Indigenous peoples of North America, Bull notes that thousands of Indigenous people from Canada served overseas during the war and then claims that “…several of these men were patients in the Perkins Bull Hospital.”[5] We hold the hospital registers, and to my knowledge no one has yet located all of the entries for Indigenous Officers. We are only currently aware of an entry for one: Lieutenant Sawatis Tawanladah (also known as Lieutenant John Randolph Stacey).[6] He was apparently the first Indigenous person from North American to receive a combatant commission in the Canadian Forces.

Material related to Bull’s elevation to an honorary chief of the Sioux Tribe: On July 25th, 1939 on the grounds of the Saskatchewan Exhibition Grounds, Chief Harry Littlecrow of the “Moose Woods Cree Indian Reservation” made Bull an “honorary chief of the Sioux Tribe.”[7] According to Chief Littlecrow this honour was conferred upon Bull in order to acknowledge all of his work on From Hemisphere to Hamlet: “[m]any of our [Sioux] people have been honored by the King, who is the white man’s chief. Therefore, it is fitting that I, an Indian Chief, should confer an honor upon a man whose researches into the history of my people, have brought him distinction amongst my people and his own.”[8] From that point on Bull was to be known to the Sioux as “Big Friend White Bull.”[9]

Unfortunately, we do not know as much as we would like about the circumstances surrounding this event.  What we do have are files containing Bull’s draft speech notes, the purported remarks of Chief Littlecrow, various newspaper articles, a depiction of Bull wearing a ceremonial headdress, and a small amount of related correspondence. Perhaps additional pertinent details about this event and its wider context can be found within other files in the fonds.

Hopefully people will take an interest in the above-discussed Wm. Perkins Bull’s records, so that his research and writings about the Indigenous peoples of Peel and North America can be thoroughly reviewed, critically analyzed, and utilized in scholarship. Analysis of his work may assist in adding to the discourse around a variety of subjects, including the historiography of Indigenous Studies in Canada, our understanding of the life and times of Sitting Bull, the role played by Indigenous peoples during the First World War, and more broadly, interactions between Indigenous groups and European settlers in the Peel area from early colonial contact up to the 1930s.

[2] See for example “Secrecy, Archives, and the Public Interest” by Howard Zinn and “‘Having New Eyes’: Spaces of Archives, Landscapes of Power” by Joan M. Schwartz

[3] The photographs can be found in a file titled “First Nations – Sitting Bull photographs” in the Wm. Perkins Bull fonds, accession RPA 2012.056, box 59B

One response to ““From Hemisphere to Hamlet:” Research on the Indigenous peoples of the County of Peel and North America within the Wm. Perkins Bull fonds”