“To a wanderer in forest solitudes a sense of mystery is often perceived which lures him on and on into the verdant depths of the woodland world.” Alexander Porteous, The forest in folklore and mythology, 1928

Since childhood I have harboured a keen interest in trees – their history, mythology, classification. To this day, nothing dissolves my stress more quickly than a walk along sunlit forest trails awash with fragrant woodsy scents. So, I was pleased a few years ago when I received a fascinating reference question concerning historic / pre-European settlement vegetation in the Peel area. This was not a topic I had approached from a “records” perspective before, and I appreciated the interesting (and challenging) opportunity the question provided.

Ever since that request I have maintained a sort of mental checklist of the records here that shed light on the natural history of Mississauga, Brampton, and Caledon, in particular any record that pertains to historic forests and other flora. In honour of the beautiful fall season that is now upon us, I want to outline and discuss some of these records and other resources available here. Beyond general and local interest, I feel that such material might also be of use to scholars studying the effects of climate change in Peel and perhaps the wider world, given that the ongoing climate crisis is resulting in changing vegetation growth patterns and a marked decline in overall biodiversity on a local and global scale.

One of the most interesting things I learned while looking into this subject is that the vast majority of the original forest and other flora found in Peel in the 17th and 18th centuries is long gone. In the 1930s Peel’s unofficial historian, Wm. Perkins Bull, appears to lament this fact, but does suggest that vestiges of those older forests could still then be gleaned here and there: “Although by far the greater part of the original forest [in Peel] has been cleared, we may still see here and there on the sideroads and along the surviving rail and stump fences of the pioneers a fascinating variety of trees, shrubs, and plants.”

Might some of these woodland shadows still exist in the Peel of 2019? Perhaps.

Let’s look at some records.

When the European surveyors moved through Peel between 1806 and 1819 laying out the lot and concession lines, they also recorded information about the flora they encountered. Their notes therefore constitute the earliest systematic written record of what sorts of plants were then found in Peel. We do not have in our holdings the actual “surveyor diaries” as they are known, but we have other resources that are arguably more useful. (For those interested, the original diaries are split between the Archives of Ontario and the Ministry of Natural Resources).

One of our related resources are what we refer to as the “annotated land abstracts” as commissioned by the aforementioned Wm. Perkins Bull.  These are typed and handwritten summaries of property information as found in the official land abstracts, but with additional information gleaned from the survey diaries. The records are arranged by township, concession, and lot.

This entry tells us that lot 12 in concession 2 WHS in Chinguacousy Township (now an area in the City of Brampton north of Bovaird Drive between Chinguacousy Road and McLaughlin Road) was covered with maple, beech, and basswood trees, and that there was a small creek in the western portion of the lot. We also learn that this lot was patented by Richard Bristol (a surveyor) and that the next owner was William Frisbie.

We have these annotated records for most of Peel, with the notable exception of those lands historically found in Halton County (Trafalgar Township) that were added to Mississauga in 1974.

A nice companion record to the annotated abstracts are two plans, also commissioned by Bull, that graphically illustrate the location of flora throughout early Peel. Unfortunately, we only have plans for the Township of Toronto (now Mississauga) and the Township of Caledon (now the north-west portion of the Town of Caledon). However, the annotated land abstracts can be used to fill in the gaps for the other townships then found in Peel.

These plans are based on the original surveys conducted between 1806 and 1819. Overlaid over the drawn lots and concession lines are handwritten annotations denoting the location of flora as originally noted by the surveyors.

Complete, full resolution versions of both plans are available for download via PAMA’s Lesson Resource Kits.

Some of the material discussed above was likely commissioned by Bull as part of his more general research into the natural history of the Peel area. And here in the Wm. Perkins Bull fonds we also have some of his planned narrative text, wherein he outlines and discusses the natural history of the area. These fragments, while incomplete, still provide some interesting material. Here is a draft table of contents for his overview of Peel’s flora:

In particular, I very much enjoy his overview of the trees of Peel County – here are some sample pages: Report of Preliminary Conservation and Reforestation Survey of Peel County (1940)

Found among the various Committee reports to Council in the County of Peel fonds is an interesting January or February 1940 report detailing necessary conservation and reforesting efforts in the County. First page of the report

Among other things, the report reveals that:

It is interesting to note that we here in 2019 are still struggling with reforestation issues that officials were wrestling with in 1940.

The full 1940 report can be downloaded here: Report of Preliminary Conservation and Reforestation Survey of Peel County, 1940 (Jan-Mar), County of Peel fonds

Readers of our blog may recall that I have a huge interest in and appreciation for area by-laws, and as it turns out, there are quite a few within our records here that pertain to regulating trees and other vegetation in the Peel area. For example: 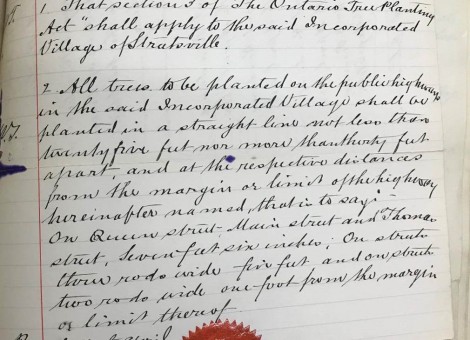 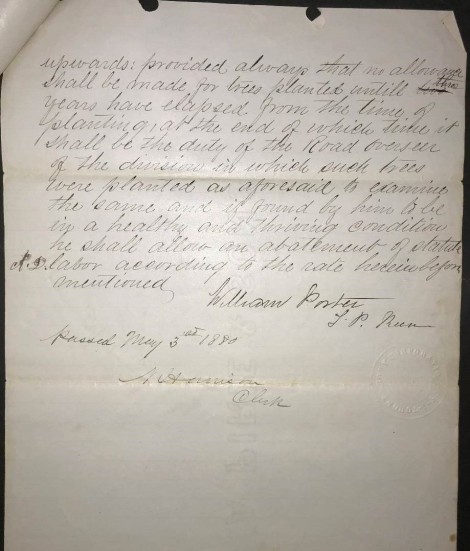 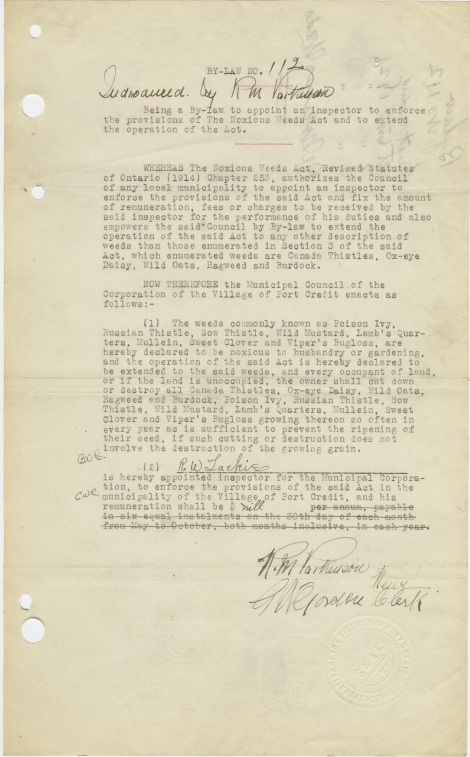 This bylaw has two versions – the original as passed by council, and a really neat “broadside” version, designed to be posted in public areas. 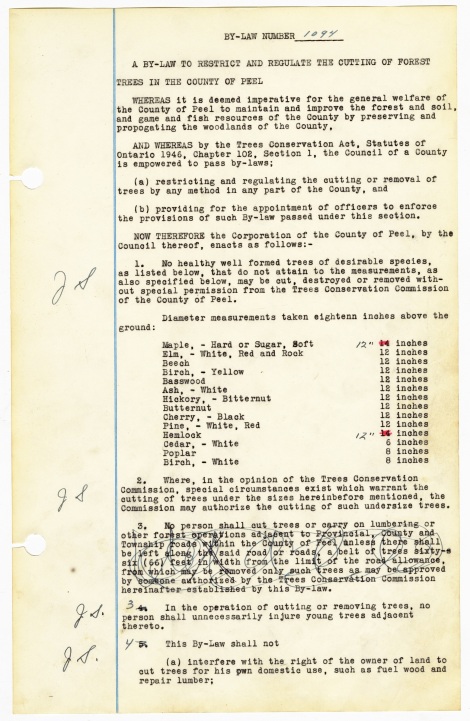 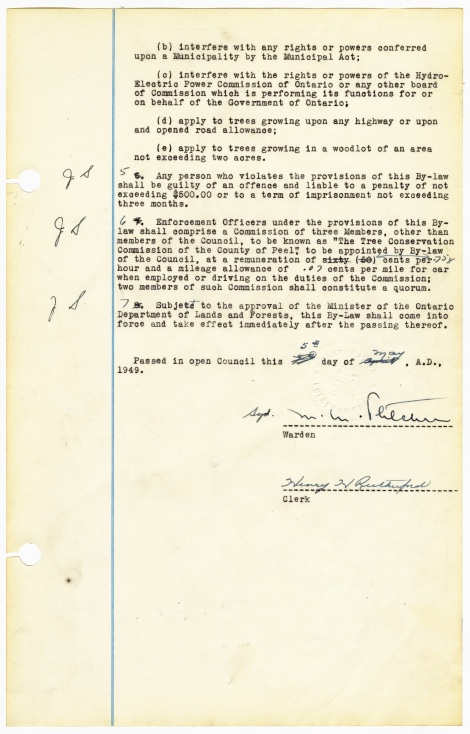 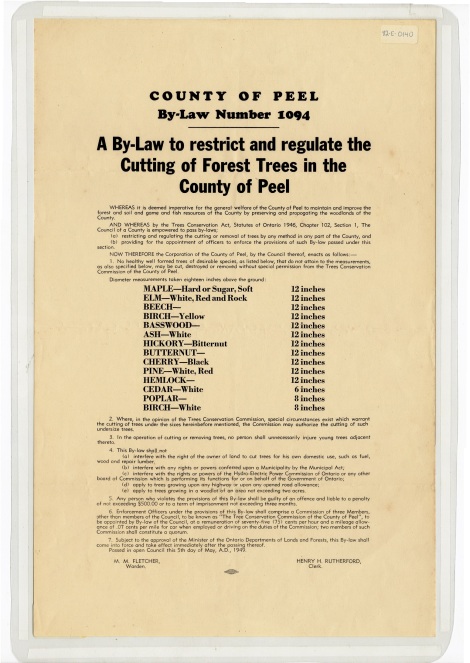 Given that different trees require specific types of soils to thrive, historic mapping of soil types can help researchers determine where certain trees likely grew. Here in the Archives we have a 1953 soil survey report and accompanying map that identifies the various types of soils found throughout Peel. The map and report can be found online, but anyone wishing to consult a physical copy can do so here.

Within the Wm. Perkins Bull fonds can also be found a range of illustrations and photographs that Bull collected or commissioned during his research. Some of my favourites are a series of detailed illustrations by artist Margaret Graves of leaves and nuts from a variety of different trees and other plants then found in Peel. Included among the illustrations are red oak, white birch, tamarack, hickory, low bush cranberries, walnut, hazelnut, black hawthorn, beech, basswood, and others.

And here is a sampling of other graphic material from the Bull fonds documenting in some way the trees and other plants of the Peel area:

Illustration of Francis Campbell’s property as it looked in the 1850s in Campbell’s Cross, a hamlet within Chinguacousy Township, drawn in the 1930s

View of the Belfountain area taken from the Forks of the Credit railway station, Township of Caledon, [193-]

Remnants of an old Corduroy Road in Toronto Township, [193-]

Trees along the Credit River in Cheltenham, Chinguacousy Township, [193-]

Reports and publications in our reference library

In addition to the records outlined above, we can also provide researchers with a number of published items, available in our Reading Room’s Reference Library.

This book includes information on the following subjects as they pertain to Peel:

In 1975 in preparation for the drafting of an Official Plan, the Region of Peel compiled and released a “physical survey” of the region which was meant to frame future work on an assessment of the “…physical, social, economic, and environmental impacts of urban growth in Peel.” The survey was conceived as constituting an important first step in “…measuring the environmental impact of urbanization, and in determining the priorities for the use of Peel’s natural resources.”

Among chapters on such things as climate, bedrock geology, mineral resources, and soil types is found one looking at forestry. And it is this chapter that I want to highlight, with it providing information on the following:

“Historical vegetation mapping for the Region of Peel,” University of Toronto study (2013)

This report authored by a team from the University of Toronto, led by Professor Danijela Puric-Mladenovic, constitutes one of the best sources on historic vegetation in Peel. It provides a fantastic overview of the subject, with the research team making use of the aforementioned survey diaries as well as soil surveys and other resources. The report can be accessed online: Historic Vegetation in Peel (2013)

In closing, I want to include another ruminative quotation from Porteous regarding the captivating beauty of forests:

“Every season of the year imparts its own peculiar beauty to the forests. In early spring a shimmer of tenderest green spreads over them…as if the wand of an enchanter had been waved over it. These tints gradually deepen with the advent of summer, when in the hot noontide hours the tired wanderer may repose in the cool shade, lulled to rest by the hum of insects and the music of rustling leaves. When autumn comes, what an inimitable palette of gorgeous colour is spread out before the eye…and when winter holds the land in its icy grasp, even then the forest has a grander and a grace all its own, especially when the branches and twigs glitter in the sunshine with hoarfrost, or gracefully bend under a dazzling weight of snow. ”

Hopefully this post will encourage our readers to consider both woodland wanderings and Reading Room perusals! Happy fall everyone.

For more autumnal archival musings, please check out our 2017 post on Halloween in Peel.

August 2021 edit: Readers may be interested in a talk I gave on this topic with a Mississauga focus for the Museums of Mississauga, available on the City of Mississauga YouTube channel.

September 2021 edit: Added in area by-laws that speak in some way to trees/plants

2 responses to “Researching the “woodland world”: Historic vegetation in Peel”